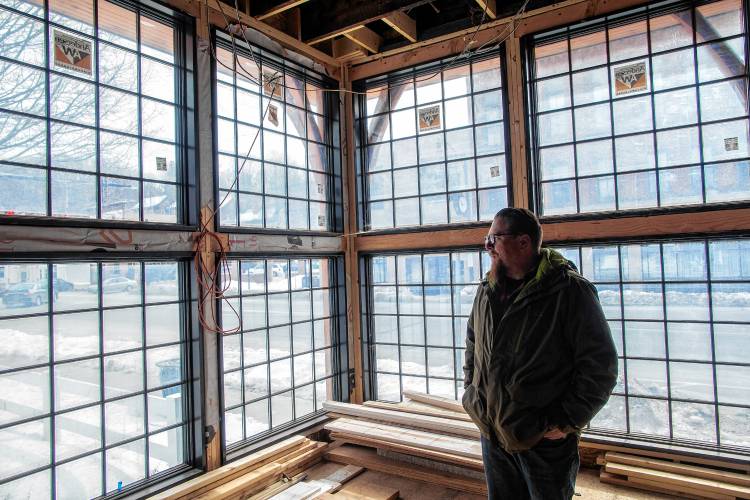 Damon Lewis says he’s drawn to Franklin’s vibrant community, its industrial history and the perseverance of its people.

That’s why the Texas brewer is looking to build a craft brewhouse in Franklin and join the city’s revitalization efforts.

“They still need an anchor business that will help bring people to the area,” Lewis said, his breath showing as he walked around the bare, unheated interior of his soon-to-be brewery Wednesday. “That’s what we hope we’re going to end up being.”

Lewis and his co-owners, his wife Megan and couple Jason and Shelly Harrington, are leasing a storefront in Buell’s Block on Central Street in Franklin. They’re right next door to Outdoor New England, which is run by Marty Parichand, the Executive Director of Mill City Park, an organization working to bring a whitewater park to Franklin.

Lewis said he and his team have been talking with Parichand, hoping to continue the revitalization efforts he and others have started downtown.

Right now, much of Lewis’s storefront is empty – but he has a vision: He wants to create a modern English-style pub with an outdoor patio and long tables where people can sit and socialize.

The name of Lewis’s brewery is going to be Vulgar Brewing – a title Lewis said he understands might cause some people to take pause at first. Lewis said they are not using Vulgar in its modern meaning; they want to use it in its old-English meaning, based on the Latin word “vulgus,” which means crowd or people.

“The way we want to use the word is to help bring a sense of community and bring everybody together,” he said. “We’ve taken it to its original meaning, which is kind of like, something that belongs to the common people, or the language of the common people.”
He said they’re hoping it will be a place where people can not only go to drink good beer and eat good food – the brewery will likely have a small food menu, which will include artisan pizza – but also a place where people can sit, chat and play board games.

“You go there, and regardless of any differences, people can share a common beer and talk about things,” he said. “That’s what we want to foster here.”

He said he wants the brewery to become a hub for people in the city.

“The ultimate goal is to get Franklin back to where everybody can be really proud of Franklin,” Lewis said. “I think people do have a sense of pride, but we want to make sure everybody sees why we’re proud.”

Community
Lewis said Vulgar Brewing is still working on solidifying its beer menu, but that there will be a selection of various styles, including Indian Pale Ales.

Lewis has plenty of brewing experience. He was a brewer and one of the founding members of Cedar Creek Brewing in Texas for eight years and was a homebrewer for 12 years.
He’s also been working at 603 Brewing since he moved to New Hampshire.

Lewis is now living in an apartment in Franklin with his wife. He said he was struck by the city when he first visited it last May.

“When you drive in, it has this picturesque view with the church and the steeple and the mountains in the background,” he said.

Lewis said the entrance to his brewery will be at the side of the building, instead of the front. The brewery equipment will likely be positioned at the front, so people can see it from the Central Street windows.

There will be a bar and a set of long tables, where people can sit and socialize.

“I know a lot of people don’t necessarily love that because it forces you to sit by strangers, but guess what, you have a beer or two, and they might not be strangers,” Lewis said. “You may have found a new friend that way.”

They are also planning to keep as much of the historic brick as they can inside, Lewis said.

Timeline
Lewis said he hopes to have the brewery open in July.

Their brewery equipment will be coming in around June, thanks to a loan from Franklin Savings Bank and the Capital Regional Development Council. Brewery equipment is expensive: Lewis said the cost is around $120,000.

Lewis said the brewery will give people in the Lakes Region access to more craft beer. The nearest other craft brewery is Kettlehead Brewery in Tilton.

“We just want to be able to enjoy what we do every day,” he said. “We have a passion for beer and we want to be happy with what we’re doing.”

He said he hopes people in Franklin can put their trust in him to make this project work.

“I know I’m a bit of an outsider because I didn’t grow up in Franklin or anything like that, but sometimes you just go to an area and you feel connected to it,” Lewis said. “New Hampshire and Franklin have done that for me.”

“We really are committed to helping Franklin improve,” he added. “I want to see the town get better. That’s really our goal.”