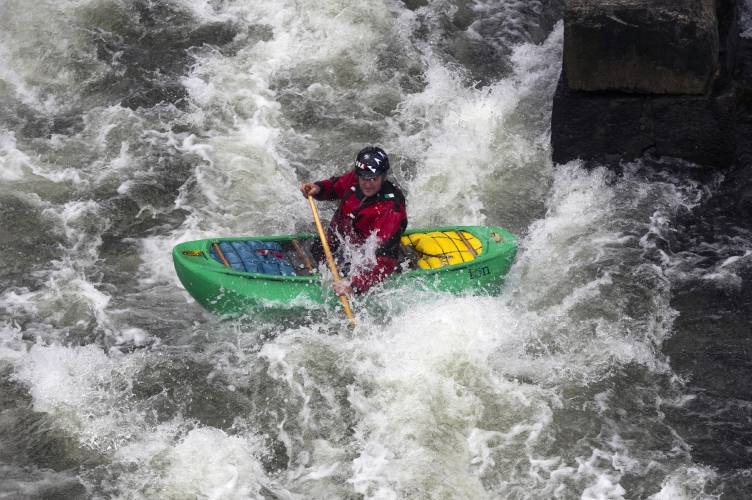 The proposed whitewater park on the Winnipesaukee River in Franklin now has funding flowing fast enough to begin construction on a freestyle kayaking hole downtown near Trestle View Park.

“This is the first piece of construction funds we’ve received,” Mill City Park Executive Director Marty Parichand said. “Even more so than engineering work we’ve done, it’s a sign of things to come. It shows that our project is tangible, and it is happening.”

Mill City Park was awarded $500,000 in tax credits on Tuesday from the New Hampshire Community Development Finance Authority (CDFA) for building of the park’s three water features: a section of the river with simulated waves for surfers with boards, a novice to intermediate freestyle kayaking hole, as well as the stadium seating near Trestle View Park and a river-level walking path.

All of those features together will probably cost around $2 to $2.5 million, Parichand said. The half a million in tax credits is a start, he said.

“The kayaking hole is our priority because it is our most accessible water feature,” Parichand said. “It’s the one feature people are going to see as they drive downtown and want to pull over and check out.”

Progress is also moving on the land portion of the park, Parichand said.

Mill City Park and the city of Franklin purchased three parcels of land adding up to 3.15 acres in the last month that will be used to fill out approximately 11-acre space located south of the railroad, where the park’s tent-camping area, a community garden, pavilion, two public bathrooms, picnic areas, educational areas, hiking trails, a parking area, a climbing wall and a mountain bike pump track system will go. The city already owns close to 7 acres on that side of the river.

The city used a $200,000 grant from the federal Land and Water Conservation Fund and $200,000 in donations, received last October, to help pay for the land purchases.
The city of Franklin purchased a 1.5-acre property on May 16 for $13,500, previously owned by the Doris Kidder Revocable Trust. The city later purchased a .68 acre property on June 3 for $19,400 previously owned by Hebert Manufacturing. Mill City Park purchased a .97 acre parcel of land on Willow Street on May 16 for $51,500.

In 2019, Mill City Park will start clearing for the access road, which will begin off of Willow Street, and installing electrical and plumbing that will be necessary for the bathhouses. In the summer of 2020, work will begin on the park’s timber-frame pavilion.

Once completed, Mill City Park will be the first whitewater park and outdoor recreation area in all of the Northeast. It will continue to work as a nonprofit and will be open to the public, Parichand said.

Mill City Park was recently named the best project in the state by the New Hampshire Planner’s Association. It’s second annual Winni River Days will be held this week, from June 21 to 23.